Monopoly is a group activity. I played many rounds over the years, and as the oldest sibling I was usually tasked with being banker as well. They always were suspicious but I have never confirmed this with my siblings before-Yes. I absolutely cheated...slipped myself an extra hundred or moved my piece a few extra spots to land not on their property. In prison, you don't cheat. Unless you're bigger than your opponent.  Then, you can do whatever you want anyway. Dan played Monopoly with the guys in his tier and it frustrated him to no end that they would cheat. Slip an extra hotel onto the board here. Steal a property there. He couldn't say anything, and if he stopped playing he would be really bored all day. He also couldn't win, that made them mad.

So, Dan got creative.

He started taking the tiny metal boats from the games. You know how Monopoly has tiny miniature playing pieces and each player picks one for the duration of the game? The boat was a favorite icon of choice for most of the guys and they would fight over who got it. Dan would hide it from the set they were playing with, and later, mail it to me. When I got the first boat I thought it was sweet. The guys played with a different set, and again Dan hid the boat and it showed up in my mailbox. This continued until I had a full set of seven ships. The CO's refused to bring any new sets to the unit- the guys had to play with the remaining options. And I had seven tiny metal boats. That's how we say I love you to our spouses from prison- via random assorted passive aggressive actions. Apologies to the guys at Geo who had to play Monopoly without them but these are my boats now. 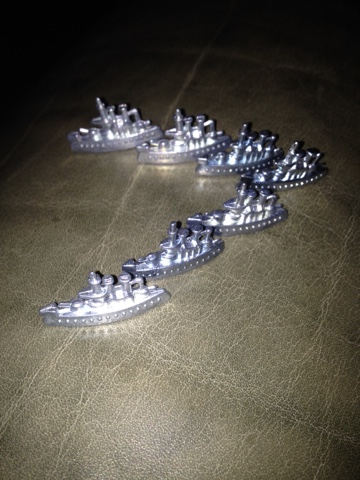 I watched a show called Family Guy often. Dan and I had enjoyed it before he went in, and it felt familiar to watch a show I knew he liked too. There was an episode (Season 8 "Dial Meg for Murder" Episode 11) where Meg goes to prison for harboring a fugitive- a pen pal in prison who she fell in love with. Then she comes home from prison, all tatted up and tough. While uproariously hysterical, the episode is accurate and spot on. I couldn't escape prison, it was everywhere.

In an attempt to reconnect with Dan, we started doing the New York Times crossword together over the phone. Dan would tell me what the date was on the paper he had and I would find it online. It cost us $12 in phone time to do it, but we really enjoyed it. The crossword has the ability to make me feel highly inferior and amazingly intelligent at the same time. I couldn't solve it alone, but with Dan helping me we could usually knock it out in a few hours.

The washer fluid light came on in my car. My car had been leased new and now had 17,026 miles on it. Less than 1000 of those were miles Dan had spent in the car with me. The majority of those miles were commuter miles, me driving to and from prisons for visiting.

My brother-in-law came with me to visit Dan, and he brought with our oldest nephew. This nephew had been best buddies with Dan before he went to prison, and he would ask us often where Dan was. After the visit he asked his father "How do we get Dan out of the box?" It was emotional for me to hear this little kid say it like that- Dan did in fact look like he was in a box sitting there behind the glass. That hit home for me. Dan was in a concrete and cement box and all I could do was look in and see that he was still there. I missed hugs.

Once every six months, Geo granted a contact visit. Ours was on a Sunday and I was very nervous. I hadn't hugged Dan since the visit where he thought he was going to be killed in MCC. It had been a rough visit and I remember when I hugged him goodbye I genuinely wondered if I would ever see him alive again. Now, all I could do was look at him and talk to him, but no hugs. Everything about the contact visit was the same as a regular no contact visit except this time I was escorted to a tiny room with a table and locked in. The guard came back ten minutes later with Dan and outlined the rules. One hug and kiss at the start and end of the visit, hands on the table at all times. We sat facing each other across the table and the guard stood outside the door, occasionally peeking in the window at us. She kept interrupting the visit to yell at Dan and he was upset from the start of the visit. He had been under the impression from the other guys that these visits were pleasant and that we could hold hands and sit next to each other. Our experience was so very different, and it appeared to be because we were white.

Needless to say, the visit went poorly. Dan and I hugged, kissed, sat down (hands on the table)... and then had a fight. I left the visit devastated. Absolutely gutted to my core. All these months and the first chance we get to sit in a quiet room and talk eye to eye... and we fight? We weren't even arguing about something we could change or fix. I went back to my parents house crying and would have crawled into bed and ignored the world for a few days. But my little sister was in the kitchen when I got home, and she asked me to take her shopping. So, I pasted a smile on my face and agreed to take her out. I figured it was better than wallowing in self pity and depression.

After we shopped and came home, I felt a lot better. I decided to go back to see Dan for the regular evening no contact visit at 6pm. I begged my sister to let me bring my nephew, so I could have something to distract us from our fight. Remarkably, she let me bring him! It was extremely cool to bring this toddler to see Dan, once again- a child he had never met before. We sat behind the glass and I made my nephew perform all of his peek-a-boo tricks and baby songs. It really lightened the mood and I felt almost normal. This baby literally saved me when  Dan was in prison. He was a human being I could care for, hug and love. Someone who needed me and who looked at me with adoration and genuine happiness when I was so lonely. When he grows up, I will show him the hours and hours of videos I took of him during his first two years.

Dan and I both wrote each other letters that night apologizing to each other. The thing about prison fights is that they are usually a result of built up stress and frustration and not typically about anything important. It didn't make the fights any easier, but it did make it less painful to resolve them once we calmed down. Dan asked me to play the Pink song "Glitter in the Air" for him when he called that night. He had seen Pink perform it at the Grammy's on TV. For once, no one changed the channel and he got to see the whole performance, and it had moved him. Pink is suspended from the air, does acrobatics and sings upside down and there's water... it is a very emotional performance. And also amazingly original. But it was the words...they somehow hit us both the same way.

Everything was okay between us again. Valentine's Day came and went. I wore a red dress to visiting for the occasion. We were sitting and waiting for something good to happen. That's what prison seemed to be all about. Waiting.